Over two days, Migrating Texts brought together 17 expert speakers, four panel chairs, and a wide range of attendees from academia and the cultural and creative industries to discuss subtitling, translation and adaptation. We’re incredibly grateful to all those who came and contributed to the conversation. For those who couldn’t make it, over three blogs we’ll be bringing you the main points from each session. In this blog: Translation. 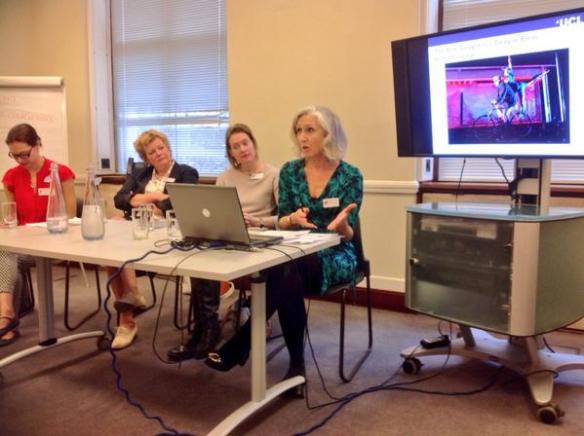 Our first panel on Saturday morning asked how we judge a ‘good’ translation, why certain works are more likely to get translated than others and how, while also offering advice to aspiring translators. Our first speaker, Dr Karen Seago, discussed the translation of non-canonical texts like crime fiction, comic books and screenplays, which is the focus of the Audiovisual Translation and Popular Culture MA she runs at City University. These sorts of texts are the most widely read, translated and adapted, yet most literary translation courses still ignore these in favour of more traditional genres. In her teaching of translation, she discusses what drives the decision making process and how intercultural issues affect the translation. She notes that in practice editors have a huge impact on the final translation (they decide to what extent the text should be domesticated), and that professional translators are under so much time pressure that they cannot afford the same kind of analytical thinking about translations as students.

Judging a ‘good’ translation, Dr Seago explained, depends on the nature of the text. Crime fiction, for example, is formulaic, and depends on things like repetition and superfluous detail, which you would often expect a translator to ‘tidy up’ in translations of other genres. In addition, crime fiction depends on reader involvement, whether intellectual or affective, so a good translation must achieve this above all. As part of her role in the Executive Committee of the BCLA, Dr Seago also runs the annual John Dryden Translation Competition. She explained that the judges look primarily at how the entry functions as a literary text: Is it a fresh new voice? Does it grab the reader? Can it introduce new metaphors or expressions without sounding like translationese? In this sense, being a ‘good’ translator is as much about reading widely and choosing the right text to translate as about the translation itself.

As well as teaching translation at UCL, our second speaker, Dr Geraldine Brodie, organises events bringing together translators, theatre practitioners and students. She finds theatre a very useful case study for teaching translation as it provides examples of the hidden or contradictory features of translation practice. There are three types of theatre translation: direct (rewritten by an expert in the source language), indirect (rewritten by a playwright in the target language) and literal. In London, the trend is for indirect translations, although these are almost never advertised as such: instead, they are a ‘version’, ‘adaptation’, ‘remix’, or ‘a new play inspired by…’. Of 99 plays on in the West End in March 2014, 11 were translations, mostly indirect translations with some surtitled plays. Dr Brodie affirmed that everything is translatable, but it is clear that certain plays are more likely to be translated than others, especially Western European and Russian classics. Writers like Ibsen and Chekov are now considered part of the English canon, and are therefore seen to offer a much higher chance of commercial success than work from an unknown writer, meaning that we see far more re-translations than new translations. Whether a play gets translated also depends on whether a successful English language writer would make a good fit with it, as a ‘big name’ is seen as necessary to draw in an audience.

The final speaker in this panel, Samantha Schnee, founder of Words Without Borders and chair of the Writers in Translation committee at English Pen, gave practical information about ways in which translation is supported. She explained how English Pen use Arts Council grants to support publishers to pay for translations, which can cost between £2-10,000. The last round of funding supported 20 books from 10 languages. The Pen Promotes scheme also offers support for the marketing and promotion of translations, and urges publishers to recognise the work of translators. Words Without Borders offers free online access to translations from across the world. The team are working to find and translate writing from all countries, and often work with academics to gain insights into those lesser-known literatures. The site also publishes a blog with useful articles for any aspiring translator. Other recommended resources for translators include the Emerging Translators Network, the Harvill Secker Young Translator’s Prize and the British Centre for Literary Translation’s Mentorship Scheme. As a key piece of advice, Samantha affirmed that translation is above all creating art – a translation has no chance of success if it does not read well.

In the discussion following the speakers, all three agreed that translators must act as agents for the texts they think are deserving of being published in translation. Publishers and editors constantly receive recommendations from all sides, but those with expertise in foreign languages and cultures are well placed to discover a hidden gem, and must be pushy! 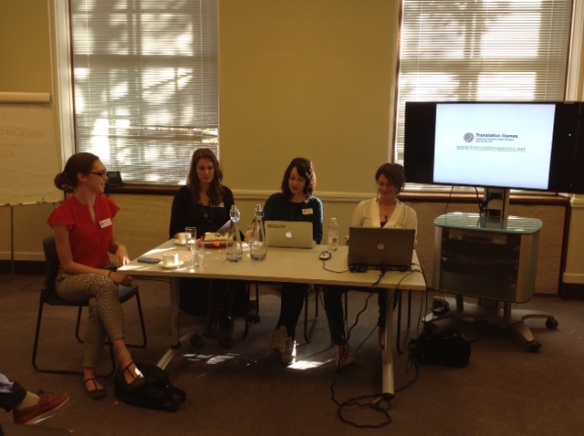 The second panel of the translation session discussed innovations in translation practice, in both the educational and commercial spheres. We began with Dr Ricarda Vidal (Kimg’s College London) introducing Translation Games, her fascinating project which plays with translation across not only different languages but different media in a ‘public-facing programme of ludic workshops’. Translation Games employs the arts to make languages interesting for the general public, while at the same time trying to discover whether there is an ‘essence’ of a text which carries through different media. As Dr Vidal explained, Translation Games began with a project called What We Made in which a short narrative text commissioned from the American Colleen Becker was translated in a sort of telephone game from English to French to Italian and so on. Each translator only had access to the previous step, although the text was also translated back into English at every stage. At the same time, the text was translated from writing to film to ceramics to an audiovisual piece and finally to choreography, and simultaneously from text to textile. They found there was indeed an ‘essence’ which carried across all of the versions of the text. Translation Games has since run further projects involving translation from poetry to scents, and a challenge for students and artists to translate a photographic version of a poem by the Serbian Vasko Popa into an English poem. The next stage of the project is to develop activities which can be taken into schools.

After having ‘apprenticed’ at And Other Stories, our second speaker Deborah Smith is now setting up her own publishing company focused on translations from non-European languages. Deborah explained how And Other Stories, which recently became an Arts Council England National Portfolio Organisation, functions as a not-for-profit social enterprise, meaning its work is considered of benefit to the community. They publish some fiction written in English along with their translated works, partly because English language fiction has more visibility (in terms of literary prizes and other critical recognition), but also in order to capture an audience that would not usually go for translated fiction by branding them both within the same series. And Other Stories runs on subscriptions: money from subscribers funds the printing of each new title. In exchange, subscribers get thanked by name in each book and are invited to play a more active role in recommending further books to be published. This sense of community is furthered by the reading groups which And Other Stories run to help them select new titles for translation.

Moving on to her own enterprise, Deborah highlighted that translations from non-European languages are a huge gap in the market, as a result of significant biases against them in the publishing industry. As most commissioning editors cannot read (many) non-European languages, translators often have to translate the whole book first for them to judge it, without any guarantee of payment. In addition, translators have to be scouts, agents and editors too, because so few people in such positions have the requisite language skills. Another problem is that non-European language authors are much less likely to speak English, so when it comes to marketing books, publishers cannot count on the usual tools of readings and interviews. Deborah maintains that this challenge should be seen as an opportunity for publishers to think of more exciting, innovative ways of marketing books which may actually help them to reach new audiences.

Finally, Emma Langley, founder of Phoenix Yard Press, introduced her work with children’s books and critical literacy, explaining how she uses images to get children interested in both reading and languages. She maintained that while children’s books have very rarely been translated, the tide is finally starting to turn. However, recent experience has proven how reticent book buyers are towards translated children’s books still: buyers’ reported that the cover of the translation of Norwegian political satire Barna Som Fosvant (pictured below) looked ‘too foreign’. Instead of giving in to buyers’ demands, Phoenix Yard goes directly to potential readers, mainly schools, offering discounts if they order in bulk. 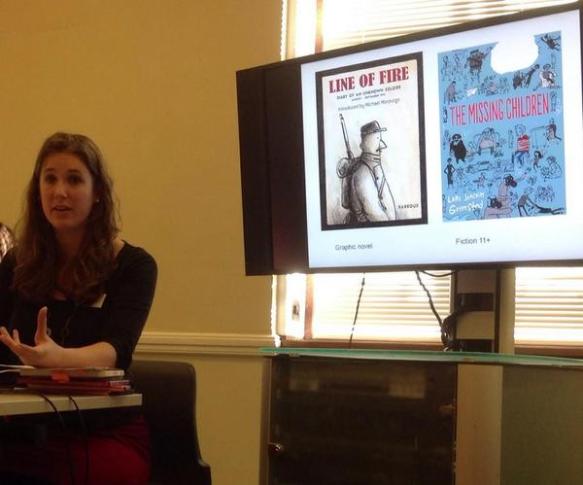 Phoenix Yard’s biggest success so far has been Line of Fire, the translation of On Les Aura, the diary of an anonymous French soldier from WWI, found and illustrated by Barroux. Emma explained the many innovative ways they have been publicizing the book, including work in schools funded by the Arts Council, and the creation of a range of related teaching resources. She added that getting an ally, recognised by the book trade – in this case Michael Morpurgo – to write an introduction can be a great way to win over wary buyers. Moreover, Phoenix Yard employed a unique and very exciting event to publicize Line of Fire before it had even been translated: The Spectacular Translation Machine. As part of the London Literature Festival, members of the public were challenged to translated the entire graphic novel in one weekend, with each panel and its suggested translations pegged up around the room. This was not only a fantastic method of publicity but a new approach to translation practice which would surely work well in classrooms.

Emma finally spoke about her work in schools, giving children – many of whose first language is not English – the images from books published my Phoenix Yard and getting them to write the story in their own way, as a springboard for them to reflect on linguistic and cultural differences.